Klimagune Workshop "Updating Climate Change Research in the Basque Country" March 8, 2010 - Euskalduna Conf. Hall - Bilbao Klimagune Workshop is an informal forum on climate change aimed at all the parties involved in the Basque science and technology network. It is intended to enable them to share knowledge, projects and new scientific advances, to establish synergies and potential frameworks for co-operation between research groups, organisations and institutions working in this field.
Do you like it?
Read more
Categories

Klimagune Conferences "Workshop 2011: Multidisciplinary views of Climate Change" The Klimagune Conferences initiative involves a series of lectures through which the aim is to incorporate multidisciplinary insights and viewpoints into the debate on Climate Change, thereby helping to create a society that is more and better informed regarding the collective venture of social and economic development from a sustainable perspective. The purpose of these lectures is to help create a Basque society that is better informed and more aware of Climate Change through the contributions made from complementary standpoints by leading experts who pursue their work in this field.
Do you like it?
Read more
Categories

Workshop 2011: Addressing Climate Change through Adaptation The second edition of the Klimagune Workshop is to be held on Friday, 6 May, at the Euskalduna Conference Centre in Bilbao, under the heading: “Addressing Climate Change through Adaptation”. The event will consist of a plenary session and three work sessions that will focus on the Marine & Coastal Environment (‘Kresala’), the Land Environment (‘Garoa’) and the Urban Environment (‘Hiria’). The common denominator underpinning the contributions made to this Workshop is Adapting to Climate Change. The Plenary Session will introduce a Keynote Speaker of considerable international renown, namely, Prof. Klaus Hasselmann, the highly respected German physicist and mathematician, founder of the Max Planck Institute for Meteorology and author of the fingerprinting method, which allows distinguishing between natural climate variability and the disturbance caused by the increase in greenhouse gases. Prof. Hasselmann will deliver the speech “The challenge of Climatic Change”. Klimagune Workshop is a forum for informal discussion on Climate Change, open to all the agents in the Basque Science and Technology Network. The aim of this initiative is to share knowledge, projects and developments in terms of scientific advancements, based on the creation of synergies and possible frameworks for cooperation between the various research groups, organisations and institutions that address this matter. The first edition was held in May 2010 under the heading, “Klimagune 2010: Updating Climate Change Research in the Basque Country” and was attended by over 100 delegates from the Basque science network. Following the suggestions made by those attending the first edition of the Klimagune Workshop in 2010, a scientific committee has been set up for this year’s Klimagune Workshop 2011 with a view to including those aspects required to imbue this new initiative with a multi-disciplinary and participatory approach.
Do you like it?
Read more 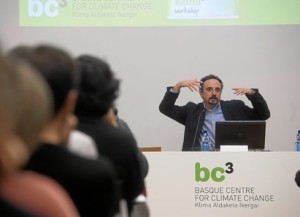