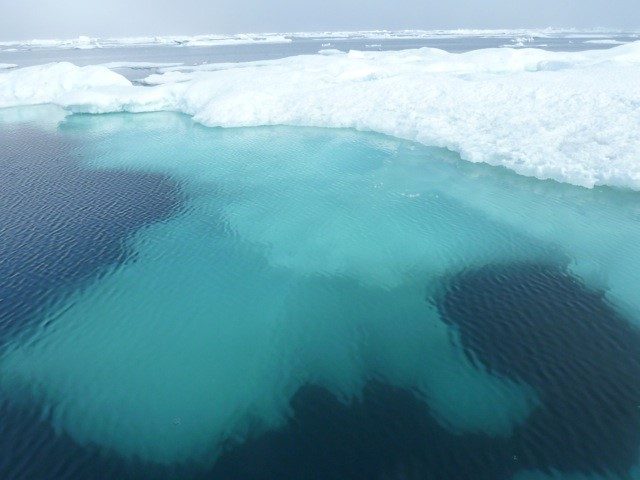 [WASHINGTON, DC/BILBAO 2017-01-19]- A new study shows the current trend of melting sea ice in the Arctic Ocean could put at risk the objectives of the Paris Agreement to address climate change.

The study’s authors conclude that, due to the future increase in the sea ice-albedo feedback, global carbon dioxide emission levels would need to reach zero 5 to 15 years earlier than expected to meet targets set by the agreement, substantially increasing mitigation costs. They also show the target of limiting the increase in global temperatures to 1.5 degrees Celsius set by the Paris Agreement would be unachievable without negative carbon emissions.

The new study, published today in Earth’s Future, a journal of the American Geophysical Union, explores how different scenarios of an ice-free summer in the Arctic Ocean could affect efforts to keep global temperature change below 2 degrees Celsius. The research, conducted by Mikel González-Eguino and colleagues from the Basque Centre for Climate Change (BC3), a research center based in Bilbao, Spain, took place within TRANSrisk, a project funded by the European Union´s H2020 research program.

“There is currently a lot of attention from scientists and from the media about when the Arctic will experience the first day free of ice,” said González-Eguino, a climate change economist at BC3. “In this study, we were interested in exploring the economic implications of this type of events. Specially, we were interested in the mitigation implications of rapid sea ice loss if we want to stabilize temperatures to safe levels.”

“Arctic sea ice extent is one the most striking manifestations of climate change and it is declining very fast, faster than previously expected in the early 2000s,” said Sérgio H. Faria, an Earth and planetary sciences researcher at BC3 and co-author of the new study. According to the last report from the Intergovernmental Panel on Climate Change, an ice-free Arctic summer is likely to occur between 2040 and 2060, but other studies argue that this could happen by 2030s or even before, Faria said.

“A critical problem is the inertia of climate and the Arctic system,” he said. “Even if we started decreasing greenhouse gas emissions right now, it would take some time for the Artic to revert its trend and cool down. Therefore, there is a distinct possibility for sea ice-free days and even months to happen in the Arctic in the coming decades.”

A direct consequence of sea ice-free conditions in the Arctic is the sea ice–albedo feedback. When sea ice melts, more open water is exposed to solar radiation, absorbing more energy and generating a self-reinforcing warming mechanism.

“In this study, we explored the implications of a transition towards an entire month free of sea ice in the Arctic Ocean by 2050, followed by stabilization, partial recovery or continued loss of sea ice,” he said. “The additional mitigation efforts that will be required to maintain global mean temperature change to below 2 degrees Celsius are substantial.”

The extra mitigation effort would imply a 20 to 60 percent higher mitigation cost to society, according to the new study. The sooner the sea ice-free conditions occur, the more difficult it will be to control climate change, especially if sea ice does not recover, González-Eguino said.

“Bringing forward by 5–15 years the full decarbonization of the global economy is going to be challenging,” González-Eguino said. “Existing energy infrastructures would have to be replaced quicker and policy instruments that make such transition feasible would need to be adopted earlier. According to our simulations, the global tax on carbon dioxide that would be needed by 2020 would be between $50 and $70 per ton of carbon dioxide, and we are currently very far from that point.”

The results also show that achieving the 1.5 degree Celsius target of the Paris Agreement is practically unachievable if the sea ice-albedo feedback is considered.

“The only way to achieve this target would be through negative emissions in the future,” González-Eguino said. Negative emissions refer to the extraction of carbon dioxide from the atmosphere, a process that would require the massive use of Carbon Capture and Storage technologies in combination with biomass, afforestation or geoengineering, he said.

“To reduce the uncertainty related to our sea-ice loss scenarios we need a closer collaboration with climate scientists in the future,” González-Eguino added. “But what is clear from our study is that if the rapid sea ice loss we are currently witnessing continues, we must expect severe implications for climate change mitigation policies.”

This is a joint Press Release of the American Geophysical Union (AGU) and BC3, Basque Centre for Climate Change.

The American Geophysical Union is dedicated to advancing the Earth and space sciences for the benefit of humanity through its scholarly publications, conferences, and outreach programs. AGU is a not-for-profit, professional, scientific organization representing more than 60,000 members in 139 countries. Join the conversation on Facebook, Twitter, YouTube, and our other social media channels.

The Basque Centre for Climate Change (BC3) is a Research Centre based in the Basque Country (Spain), which aims at contributing to long term research on the causes and consequences of climate change in order to foster the creation of knowledge in this multidisciplinary science.

Notes for Journalists
This research article is open access. A PDF copy of the article can be downloaded at the following link: http://onlinelibrary.wiley.com/doi/10.1002/2016EF000429/full

Title: “Mitigation implications of an ice-free summer in the Arctic Ocean”