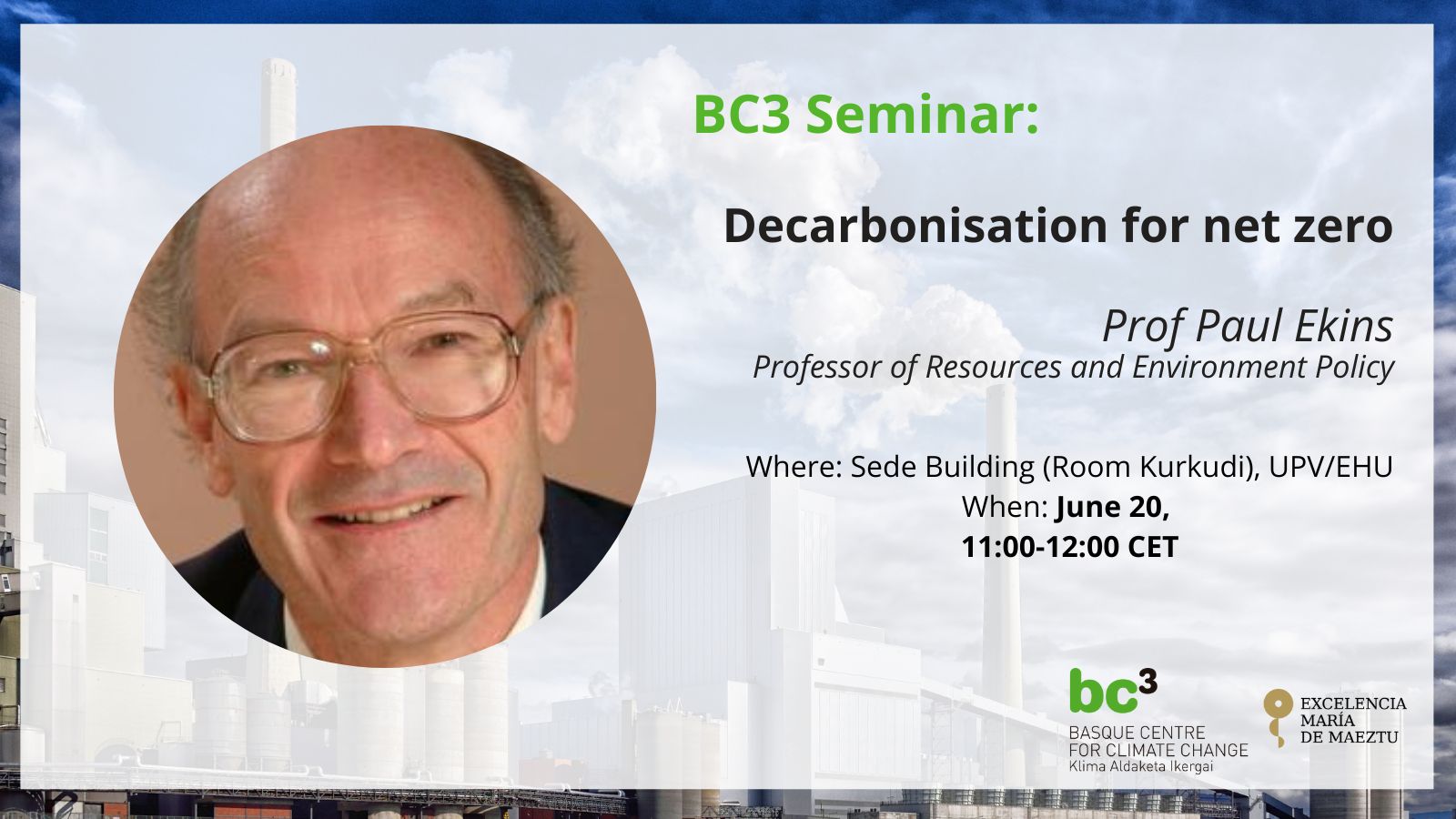 BC3 Seminars
“Decarbonisation for net zero“

The world is committed to the temperature target in the Paris Agreement to keep global warming well below 2oC, aiming for 1.5oC. This will require rapid reductions of emissions of GHGs, leading to net-zero emissions by mid-century. The seminar will explore the economics of such a transition to low- or zero-carbon energy sources, in respect of the investments that will be required and the resulting macroeconomic impacts. It will seek to cast light on whether the transition will be very costly, whether the macroeconomic impacts will be large, and even whether it may lead to economic contraction (‘degrowth’) in rich countries at least.

Paul Ekins has a Ph.D. in economics from the University of London and is Professor of Resources and Environmental Policy at the UCL Institute for Sustainable Resources, University College London. From 2004-2014 he was a Co-Director of the UK Energy Research Centre, and from 2014-19 its Deputy Director, leading on its Energy Resources theme, with research publications on low-carbon futures, fossil fuels and hydrogen. In addition, he is a member of UNEP’s International Resource Panel and was a lead author on its publications on resource efficiency and mineral resource governance. From 2005-10 he was Chairman of the Government-funded National Industrial Symbiosis Programme (NISP), the UK’s most successful programme to improve resource productivity. From 2002-2008 he was a Member of the Royal Commission on Environmental Pollution. From 1997-2005 he was a specialist adviser to the Environmental Audit Committee of the House of Commons, from 2003-2007 was a Member of the Government’s Sustainable Energy Policy Advisory Board, and in 2007 was a Specialist Adviser to the Joint Parliamentary Committee on the Climate Change Bill. He has extensive experience consulting for business, government and international organisations, which has included over 50 projects and consultancies over the last ten years, and many advisory positions. From 2003-17 he was a member, and then Chairman, of the Judging Panel, UK Ashden Sustainable Energy Awards, and he is on the Judging Panel of the Rushlight a Awards. He was a member in 2010-11 of two Ministerial Advisory Panels, on the Green Deal (DECC) and on the Natural Environment White Paper (DEFRA), and was also on the Advisory Board of DECC’s Energy Efficiency Deployment Office. In 2011 he was appointed Vice-Chairman of the DG Environment Commissioner’s High-Level Economists Expert Group on Resource Efficiency and a member of the European Commission’s high-level European Resource Efficiency Platform. From 2015-18 he was a member of the European Commission’s High-Level Panel on the European Decarbonisation Pathways Initiative. From 2017-19 he was Co-Chair of UN Environment’s sixth edition of the Global Environment Outlook (GEO-6), following the publication of which he has been Co-Chair of UNEP’s GEO-for-Business initiative. He is also Co-Chair of the Green Growth Knowledge Platform (GGKP)’s Research Committee on Natural Capital. In 1994 Paul Ekins received a Global 500 Award ‘for outstanding environmental achievement’ from the United Nations Environment Programme. In 2015 he was awarded an OBE in the UK’s New Year’s Honours List for services to environmental policy.