Nearly half of 136 coastal cities yet to implement policies to fight climate change: Study 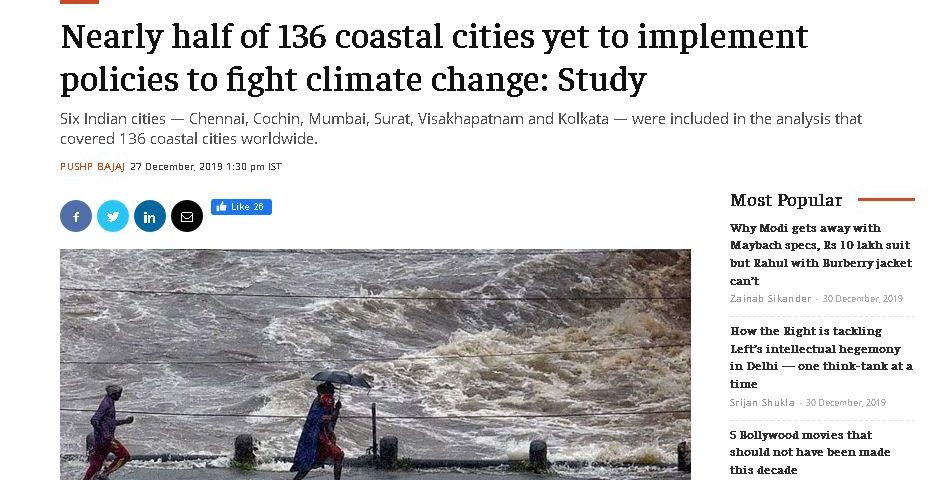 New interview of Marta Olazabal at ThePrint about the new study on climate change policies in 136 coastal cities covering 68 countries.

New Delhi: In a new study on climate change policies in 136 coastal cities covering 68 countries, a team of international researchers has found a lack of effective climate adaptation policies with no signs of implementation in nearly half the cases.

Researchers from Spain, the UK, Italy and Ireland studied over 226 adaptation policies globally — local, state and national level — and found that in almost 85 per cent of cases, planned actions are not guided by future climate change projections.

For these cities, the team identified a total of eight policies that explicitly include plans to prepare for climate change impacts: One at the national level, six at state and only one at local level (in Surat). This exhibits the lack of concrete measures at the city government stage.

The study, published in the journal Environmental Research Letters this month, said most existing policies globally have been adopted very recently, starting 2014 — a year before the landmark Paris climate deal was signed — implying that the effects of their planned actions are yet to be seen.

It also provides a report of regional and national governments worldwide on their performance so far in terms of drafting and implementing effective policies to prepare coastal cities for future disasters.