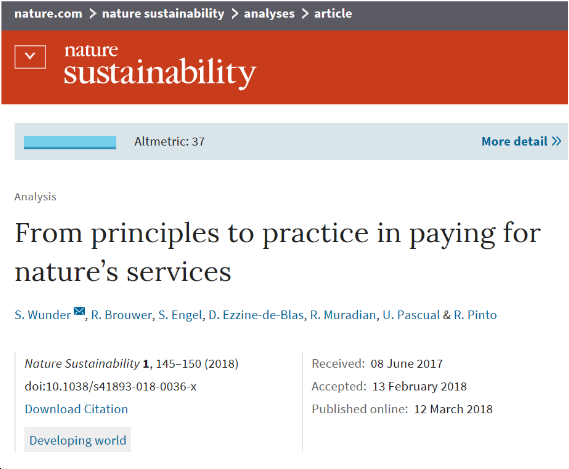 The resent publication in the prestigious magazine Nature Sustainability, where Ikerbasque investigator in BC3 Unai Pascual has participate, affirms that, while payments for environmental services are a valuable tool around the world to protect the environment, the evaluation and adaptation for each cultural and socioeconomic context is essential.

“The role of different types of PES need to be evaluated carefully, as PES can have different impacts on different social groups, for example on people who require compensation for the environmental services they secure (e.g., upland landowners and landless farmers) as well as those who bear the costs of providing the payments (e.g., poor and rich water consumers in cities)”

One practice that has emerged over the past 20 years, Payments for Environmental Services (PES), involves assigning value through cash or in kind incentives paid to land owners and farmers for managing their land so that it provides an ecological service demanded by society. Remunerated services typically include carbon sequestration to mitigate climate change, watershed management to provide clean water, or biodiversity protection in the form of protection of habitats and species.

New research, published today in the journal Nature Sustainability, suggests that due to shortcuts in design and execution, PES programs may, in practice, work less effectively than they could, lowering their capacity to provide the right incentives to land owners and restricting their positive environmental impact. The study has been conducted by the Basque Centre for Climate Change (BC3) and the Basque Foundation for Science, Ikerbasque, together with partners from Brazil, Canada, Germany and France.

“Well designed and executed PES programmes can have an important role all around the world to protect the environment and benefit society” said Unai Pascual, Ikerbasque Professor at BC3. “In some situations PES can be applied to safeguard valuable environmental services for current and future generations that otherwise could be lost, but this comes at a cost as it requires that society offers adequate compensations to land owners for their efforts in undertaking land use practices in order to secure such environmental services.”

Sven Wunder, principal economist with the Center for International Forestry Research (CIFOR) said that “naturally enough, due to differences in contexts, priorities and goals, PES programs vary in design and execution”. “While we recognize variations in strategy will always exist, we note that PES designers often take impractical shortcuts, oversimplifying circumstances, leading to deficiencies in execution, and thus probably in impact.”

To reach their conclusions, the scientists analyzed a new global dataset accrued from 70 PES projects over the past 20 years around the world. They coded design and implementation features from the case descriptions and their own field-based observations.

The authors observed that PES programs are sometimes perceived by policy makers as a silver bullet, leading to potentially misguided implementation when perhaps other policy programs would be better suited to deal with the goal of environmental protection.

Globally, given financial constraints and mounting environmental degradation, especially in regions where poverty and other social problems are prevalent. Pressures are escalating to put conservation programs to more effective use while considering their social impacts. “The role of different types of PES need to be evaluated carefully, as PES can have different impacts on different social groups, for example on people who require compensation for the environmental services they secure (e.g., upland landowners and landless farmers) as well as those who bear the costs of providing the payments (e.g., poor and rich water consumers in cities)”, said Pascual. “Such evaluations will allow to design better PES programmes by using the experience which we have accumulated over the last 20 years around the world. This should hopefully help achieve conservation impacts in ways that are environmentally effective, economically efficient and socially equitable.”